Flightmate® is one of several noticeable enhancements to the latest in a series of upgrades to the PMA8000 series audio panel. This upgrade makes the operation of the PMA8000G much easier and more intuitive.

Flightmate® has 2 ½ minutes of recording time to store flight briefs, checklists or information that the pilot would like to have easily at their disposal. These recordings are played back at the push of a button labeled “PLAY.” It is just that easy. Because the pilot stores the information, it is completely airplane or mission specific.

Additionally, it allows the pilot to record alert messages that can be triggered by some event or switch in the aircraft, like a stall warning or autopilot disconnect. Four logic inputs trigger specific messages prerecorded by the pilot.

With the success of the USB charger in the original PMA450, it just needed to add it to give the pilot the useful function of charging iPads, iPhones or other PED. It has a full 10 watts of charging power.

IntelliAudio® can be turned on and off by simply pressing the HRTF (Head Related Transfer Function) button, giving pilots one of the most asked for capabilities that significantly enhances radio communications.

The PMA8000G can be equipped with the optional PS Streamer Bluetooth® module to stream cockpit audio to a device such as a compatible GoPro® video camera and other devices that can record streaming audio. The pilot can select all audio or just the Coms.

Be the first to review “PMA 8000G” Cancel reply 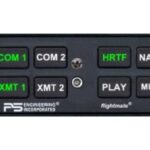