The PMA4000 is a 4-place panel mounted intercom with added capability for switching two communications transceivers and navigation receivers, as well as providing a speaker amplifier.

The ISO mode isolates the pilot from the intercom, and connects directly with the aircraft radios. The copilot and passengers are free to have conversation and enjoy the entertainment without radio interruption. The pilot is not distracted by passenger intercom use and has control over the radio communications. The “ALL” mode places everybody on a party line. Each person hears all intercom conversation and aircraft radio reception. Everyone hears the entertainment source as well.

The “Off” mode is part of the automatic fail-safe interconnect to the aircraft systems. If power to the intercom is disrupted, the pilot’s headset is automatically connected to the aircraft radio. This permits continuous radio communications.

By harnessing the computational power of microprocessors, the PMA4000 eliminates complicated squelch adjustments. Individual squelch controls mean that the system can be tailored to different microphones, as well as variations in voice levels in the cockpit.

The PMA4000 has two switched com transceiver inputs and two switched navigation receiver inputs. In addition, there are four un-switched audio inputs that can be used for other receivers or audio warnings such as autopilot disconnect or GPS alerts. There is a built in speaker amplifier in the unit. Pushing the volume control will place all selected audio, or any un-switched audio present, over a cabin speaker.

With the PMA4000 installed, both pilot and copilot have transmit capability over the aircraft radios. Only the person who presses the PTT is heard over the radio. The selected com LED shows green when selected, and flashes during radio transmissions. This feature acts as a stuck microphone indication. 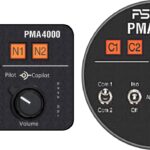