Provides Pilot Isolate (ISO) allowing the pilot to concentrate on flying the airplane while the others on board can communicate with each other and listen to great hi-fi stereo music.

The six place version adds the Crew function. Crew on one intercom channel and passengers on a separate channel.

A single squelch control knob for multiple squelch circuits provides simplified operation as well as making the intercom one of the quietest to use, even in the noisiest of airplanes.

Separate pilot and copilot transmit capabilities ensures that only the person pressing the PTT will be heard over the radio. A red transmit light is illuminated when a PTT is pressed — this also serves as a “stuck-mic” indicator. 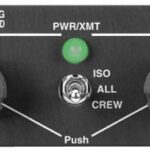