The PAR200A system combines an audio control panel, high fidelity 4-place stereo intercom with IntelliVox, Bluetooth connectivity, and a remote mounted EASA/FAA Certified Trig Avionics VHF aviation communications transceiver. Never before has there been so much communication capability with such a small panel space requirement and a low cost of ownership.

For over a quarter century, PS Engineering has been known as a premier innovator of intercommunications for crew and passengers. Now, the company has added a new dimension to their communications vision, a VHF communication radio fully integrated with the audio control panel.

The PAR200A is an FAA Approved system that combines an audio control panel, 4-place stereo IntelliVox intercom with Bluetooth®, and a remote mounted, 760-channel VHF aviation communications transceiver. Never before has there been so much communication capability controlled in such a small footprint.

This system saves cockpit space, weight, and money over the stand-alone independent systems while providing the most sought after functionality.  The PAR200’s low price makes it attractive for the aircraft that is used primarily for VFR missions or as an audio panel/back-up com to the more advanced navigation systems. The elimination of one panel mounted radio saves valuable panel space.

The pilot can store up to 5 frequencies in non-volatile memory so he can easily tune to his frequently used channels. The radio also has autosquelch, so you will always have optimal radio sensitivity set.  The left half has all of the audio panel controls for radio selection, intercom and music volume, intercom modes, and PS Engineering’s multiple music mute mode control. The PAR200 has two independent music inputs. The functions of the PAR200 are electrically independent, including the power supply, so even in fail safe on the audio panel, the VHF radio can still be used.

The PAR200A can be configured as stand alone, as COM 1, or as COM 2. This provides flexibility to allow the aircraft owner to decide if a second radio will be used and in what position. The PAR200A includes a cockpit speaker amplifier for additional flexibility.

An integrated Bluetooth system allows the PAR200A to interface with cellular telephones, giving the aircraft occupants ready access to their telephones. In addition, the Bluetooth will stream music from compatible devices like iPads, and smart phones. 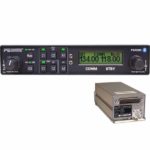