With in-flight environments that demand an ever-increasing amount of attention, pilots need a higher level of situational awareness. The Bendix/King KGP 860 Enhanced Ground Proximity Warning System (EGPWS) incorporates much of the same terrain database technology found in our air transport EGPWS, while specifically protecting light turbine and piston aircraft from the threat of Controlled Flight Into Terrain (CFIT). Based on Honeywell’s proven CFIT alerting algorithms, our EGPWS provides advanced alerting while virtually eliminating nuisance warnings.
Offering a unique combination of look-ahead algorithms, comprehensive terrain and obstacle databases and multi-level alerting capabilities, our GA-EGPWS systems provide enhanced situational awareness and the most advanced protection against Controlled Flight Into Terrain (CFIT).
CFIT is one of the leading causes of General Aviation fatalities. In addition to being TSO’d to C151 Class B TAWS requirements, the KGP 860 provides worldwide terrain database coverage, broken down into three regions – Americas, Pacific or Atlantic. The terrain display depicts terrain ahead of the aircraft, MSL altitude, Magnetic Track, Range in nm, and the elevation of the highest and lowest terrain features shown on the display.
The KGP 860 boasts all of the features of the KGP 560 with the addition of too low gear and flaps warnings, bank angle alerting, and multiple EFIS interface capabilities.
Terrain is represented by different colors, adjusting as your aircraft altitude changes.Terrain can be shown ranging from 2.5 nm to 320 nm and viewed at 360° or a 120° forward-looking view.
System is priced with the KGP 860 EGPWS, installation kit, and America, Pacific or Atlantic database card.

Note: display option not required for Class B TAWS compliance 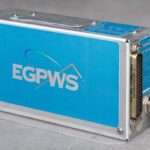